Everyone is doing like, separate blogs for all their ish and I can’t live like that.  This is my blog, my ONLY blog and I will do with it what I please, so…blogging how-to sites can suck it.

ANYway, I used to be pretty heavy into the keto lifestyle, but then divorce happened and I am done w/ excuses.  I am back on the wagon.  I thought I would sort of walk-through my meal planning process.  I do this on Sundays as is standard.  I think.  Even if it wasn’t standard, it’s how I would have to do it because soccer and t-ball are on Saturdays.  Also, in the Summer, most lake days are on Saturday.  I love my physical health, but I love my mental health even more.  Can’t forgo a lake day.

Okay, so I start planning the MONDAY before I have to get what I need and meal prep.  This allows me to do some serious recon and develop a plan of attack.  I have a Keto board on Pinterest and I always look for new recipes there.  I like to stick with what works, generally, but it’s nice to switch it up from time to time.

I was so stoked last week.  I had a plan and I had like 10 recipes I was going to make and I was gonna be a badass.  I even went to Walmart on Saturday so I could spend all day cooking with my kids.  Welp.  We ended up staying the night at my sister’s Saturday night and while I got home at 7 am, we had to clean the house top to bottom because I needed to go to the dump.  We don’t skip dump days in these parts.  No one else is going to take my trash so I do it once a week, on Sundays. Why? Because I want as little trash as possible in my house for the following week.  I have weird quirks, okay?

Okay so after dump it’s nap time for the kids, great, I can get everything prepped and ready for cooking.  Nap?  Did someone say nap?  Oh, you’re BOTH going to go take a nap? It would be a shame to waste such an opportunity that I generally on get once a month…yea, I better nap too.

I pair down what I am going to make in order to be reasonable.

THAT IS STILL A LOT, OKAY?! Plus, I will have stuff to make mid-week for supper and what not since I didn’t use all the ingredients that I had.

Firstly I prepped the chicken for the enchilada bowls.  I linked the recipe I used above and I will tell you what modifications I made.   I don’t have a scale at home, I know I should invest in one, but meh.  She called for about a pound of chicken, but I had 2 recipes to make and 3 lbs of chicken so I used about 1.5lbs instead.  Because I used more chicken, I used an entire (small) can of enchilada sauce and about ½ cup of water.

If there’s one thing I know, it’s chicken.  I had a feeling that it wouldn’t be shreddable (also not a word) in the time allotted and it wasn’t, so I cooked it a bit longer covered.  Once I was satisfied with the shreds, I shredded the chicken, put it back in the sauce and let it simmer until it was finished.

OH! Did I fail to mention that while I was at Wally World w/ both kids all by my lonesome (who were both due for naps, btw) I forgot my LIST in the dang car. I contemplated going to get it, but decided I could wing it.  Haha.  I tried.  To be fair, that’s how I ended up with some pretty great ingredients I didn’t need like red peppers and spinach, but I forgot which is why I didn’t have the  tomatoes I needed for recipe 2, Italian Chicken Bowl Thingies.  I linked the recipe original above.  ANYway.

While the enchilada chicken was doing its thang I microwaved 3 bags of riced cauliflower and diced up the rest of the chicken for recipe number 2.   I am not a big fan of mixing my meat and veg together until they’re in a pan to be cooked.  I know that’s yet another quirk, but it makes me uncomfortable.  Plus, I would have needed a bigger bowl.

After I diced the chicken, I tossed it in a bowl with a bunch of dried Italian spices, specifically a grinder full of them.  Idk if the grinder things is a gimmick or not, but if so, consider me fooled.  After I tossed them in what I thought was a sufficient amount of herbs, salt and pepper, I put the diced chicken (more like cubed, really) on a sheet pan (used to be called a jelly roll pan back in my day, just saying) that was lined with foil.

Woo!  Step 2, after preheating the oven, I washed the bowl that had the chicken in it and proceeded to add the veg.  I used a yellow onion, more broccoli than called for and zucchini.  I did the same with the herbs as I did with the chicken, only I added EVOO and minced garlic.  Once that was tossed and ready to go, I poured it over the chicken and voila!  It was ready to go it the oven! 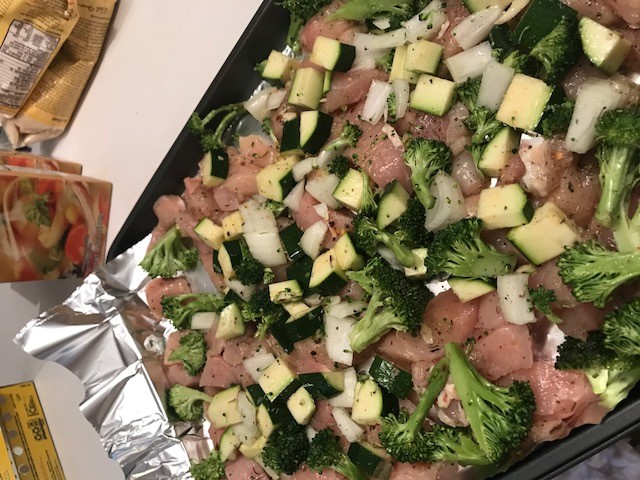 While that was cooking in the oven, I started on the baked eggs.  I lined a muffin tin with 12 pieces of ham.  Sometimes I use par-cooked bacon, sometimes I add asparagus, this time I used ham.  I cracked an egg in each ham cup and stuck it into the fridge.

20 minutes late the Italian chicken and enchilada chicken were both done and I started to prep the bowls while I baked the eggs that were in the fridge at 400 degrees for 13 minutes (I like mine over-medium.  Cook them longer if you like harder eggs.  Remember you will have to microwave them later!).

I had some leftover asparagus so I added a piece that was halved to each of the eggs with some salt and pepper. 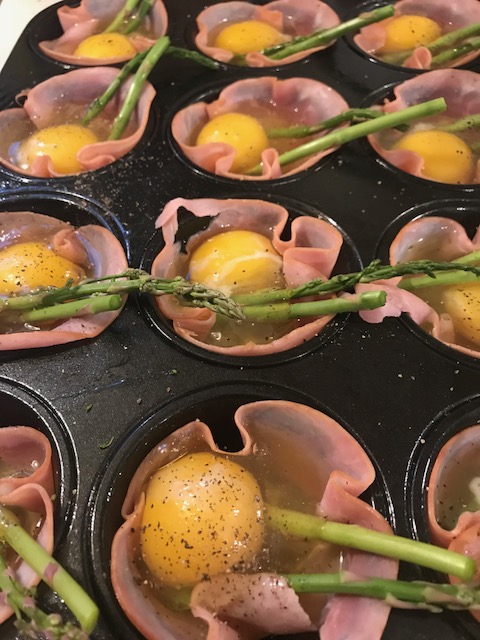 ANYway, I added ½ cup of rice to each of the 6 bowls 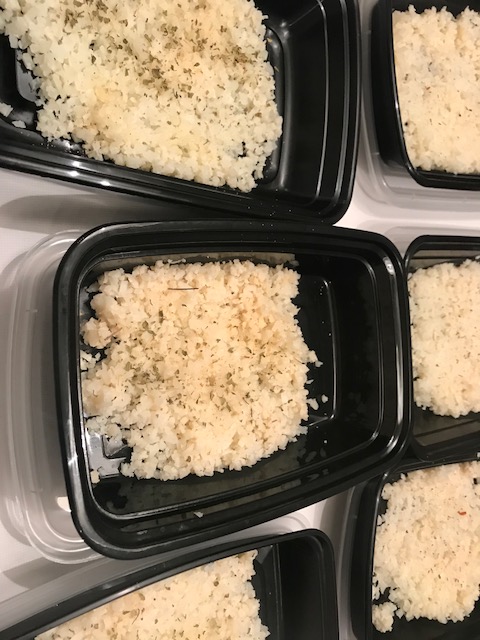 And topped them with either the Italian chicken or the enchilada chicken making 6 total meals. 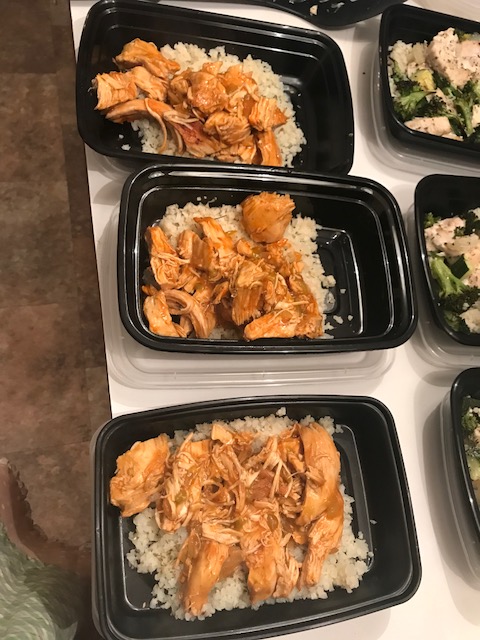 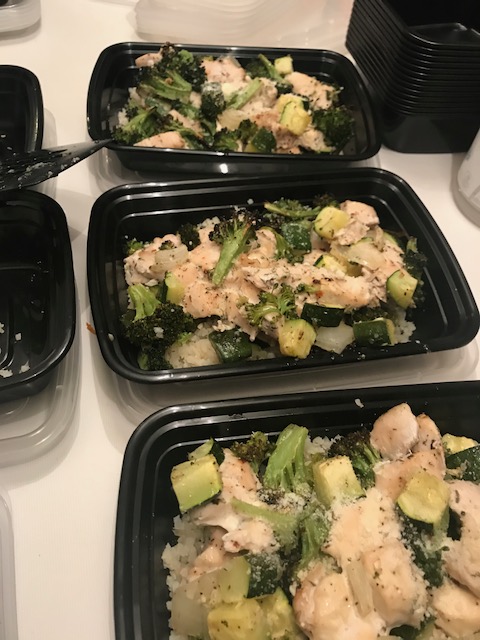 Once that was finished, the eggs were done so I pulled them out to cool.  They are such pretty lil thangs. 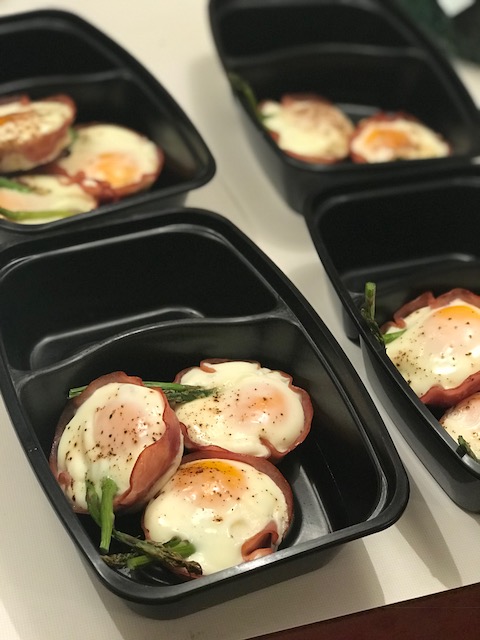 While they cooled I made plain egg salad for my kids (because god forbid it have anything GREEN in it that might be GOOD for them) which consisted of mayo, mustard, salt and pepper all to taste.  Once I had made their sandwiches, I added dill and a little hot sauce.  I put the eggs and egg salad together to make breakfast/morning snack bowls.

All in all, it was a success (even if my kids didn’t like their egg salad sandwiches—who are these kids?!).  I like the keto way of things, but it can be difficult to say no to carbs when everyone around you is eating them.  I do the best I can and carry on.

No, I don’t have fancy recipe cards you can print off.  I am level 1 at all this junk! It will get better, I hope.

There will likely be another post today.  I am in all kinds of places in my head and I know you guys miss my emo posts.

Often comical musings about my chaotic life. The good, the bad and the ugly (also the cliche) all shack up here. Dolling out hard truths about a not-so-perfect life. View all posts by Toska